skip to main | skip to sidebar

"How beautiful it is to do nothing, and to rest afterward."

(The right to looseness has been officially given)

"Everyone carries a part of society on his shoulders," wrote Ludwig von Mises, "no one is relieved of his share of responsibility by others. And no one can find a safe way for himself if society is sweeping towards destruction. Therefore everyone, in his own interest, must thrust himself vigorously into the intellectual battle."

Apparently, the crossword puzzle that disappeared from the blog, came back.

The Sky is Falling!

Everyone knows the story of Chicken Little (aka "Henny Penny") who tried to warn her coop mates when an acorn landed on her head. Well, she was wrong and the usual moral we get from that story is "Don't believe everything you hear" and/or "don't jump to conclusions".

We fret and stress about the economy, the morals of our children, politics, bad movies, blasphemous "art", and Global Warming but none of that is important in the greater context of the world's destruction by an asteroid.

"Earth's geological and biological history is punctuated by evidence of repeated and devastating impacts from space. Sixty-five million years ago, an asteroid impact caused the extinction of the dinosaurs along with some 70% of Earth's living species. A more typical recent impact was the 1908 Tunguska Event, a 3-5 megaton explosion which destroyed 2,000 square kilometers of Siberian forest. A future asteroid collision could have disastrous effects on our interconnected human society. The blast, fires, and atmospheric dust produced could cause the collapse of regional agriculture, leading to widespread famine. Ocean impacts like the Eltanin event (2.5 million years ago) produce tsunamis which devastate continental coastlines. Asteroid 99942 Apophis, which has a 1-in-45,000 chance of striking Earth in 2036, would generate a 500-megaton (MT) blast and inflict enormous damage." 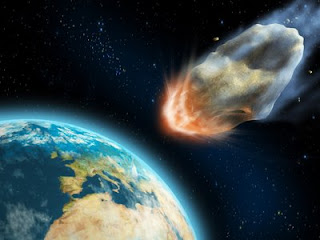 Read more... (warning: you will need Adobe reader)
Posted by Douglas at 8:02 AM

2036 - 85, yea it's possible I could still be here. Better start calisthenics. Bend over, head between the knees, kiss my a$$ goodbye yelling dowkyali...

Well aren't you just full of happy news today? I will only be a mere 70 in 2036 and definitely plan to still be around! However, if the world comes to an end in 2036 I won't last beyond then....

On the bright side, you might not need as much saved for retirement.

Or, you could read between the lines and catch the hints about Chicken Little.

The bright spot in the entire article: "Existing space technology can deflect the majority of the potentially dangerous asteroids." It means that we can deal with it throughy collaboration. Another good thing, we have time. Another good thing, a group of prominent scientists have already focused their attention on it. Another good thing, they have directed their efforts toward the U.N., which at least theoretically, can coordinate the activity.

Thanks, Logisitician. You unveiled the truth behind the Chicken Little post.

But then I shouldn't worry. Isn't the world supposed to end in 2012, long before then?

Yeah, like Logistician said, don't worry. I've seen TWO movies about how this plays out, and in the end it's Earth: 1, asteroid: zero.

P.S. I think both movies actually scored Paris at -1, so it really is win-win.

Yeah, like Logistician said, don't worry. I've seen TWO movies about how this plays out, and in the end it's Earth: 1, asteroid: zero.

P.S. I think both movies actually scored Paris at -1, so it really is win-win.

Thanks, Logisitician. You unveiled the truth behind the Chicken Little post.

Douglas
A guy without a real home town (or much of a backyard).

Other Blogs Of Interest