skip to main | skip to sidebar

"How beautiful it is to do nothing, and to rest afterward."

(The right to looseness has been officially given)

"Everyone carries a part of society on his shoulders," wrote Ludwig von Mises, "no one is relieved of his share of responsibility by others. And no one can find a safe way for himself if society is sweeping towards destruction. Therefore everyone, in his own interest, must thrust himself vigorously into the intellectual battle."

Apparently, the crossword puzzle that disappeared from the blog, came back.

Ok, who broke the microwave?


The weekend was eventful, as they say. Remember TGIF? Well, not so much this last Friday. You see, on Thursday evening late, Frances went to nuke a bag of popcorn and nothing happened except a loud grinding noise. The light came on, the carousel turned `round, but the popcorn never popped. The grinding noise sounded like the bearings of a fan were going bad. But a dying fan does not impede the microwaves... one would surmise. And, only a few minutes earlier, Faye had popped her own bag on microwave popcorn.

The microwave oven, a fixture above the stove for 5 years and a couple of months, no longer worked. 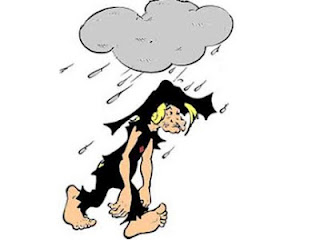 Naturally, we blamed it on Frances. She doesn't cause these things but she, like Joe Btfsplk, always manages to be there when something breaks.

Short of counter space, our only choice was to buy another "over the range" type unit. Faye had already given permission to have someone else install it. But I, being a normal (mostly) male, decided I would do the installation.

I mean, how hard can it be? Really? That hard?

Besides, to wait on installation would mean several days without a microwave oven. And that, dear friends, is unacceptable. We have hot dogs in the freezer and microwave popcorn and Faye's lasagna (leftovers from Valentine's Day) to reheat and eat.

We simply cannot function without a functioning microwave oven. It's uncivilized. It's just not done.

So I trudged off to Lowe's on Saturday morning. I would have trudged on Friday but there was golf to play that morning and golf to watch that afternoon. I perused the choices there and settled on a not too expensive one. Countertop types are cheaper, by half, than over the range types. But I would have needed more counter space than we have. So I had no choice.

Over the range units are standardized, thank goodness, but only in dimensions. They differ in wattage, features, and price. Especially price. I learned they also differ in mounting strategies. But that was later, during the Great Agony. I was but a child, not fully aware of what was to come.

My next step, after arriving home and carrying the rather large box into the house, was to uninstall the broken unit. This went well and I was lulled into believing this would be a simple job. The mounting instructions were specific (in that weird "not the writer's native language" way we've all come to know so well) and it soon became clear that the old wall bracket would not do and even the holes in the overhead cabinet would have to be re-drilled.

But these were minor snags, easily (okay... not so easily) overcome.

In just a few short hours (about 5), the 15 minute installation job was complete.

This one had best last at least 5 years.

I am happy to note that I am not the only one who has trouble doing things like that.  It has been said that I have the hands of a rapist- I beep everything I touch.

LOL. I used to not complete projects (still don't, now and then) but now I do... though it often takes quite a bit of time...

Douglas
A guy without a real home town (or much of a backyard).

Other Blogs Of Interest